End Stage Dementia is often the most confusing and least educated of all the stages.  In the world of medicine, there are tools that medical professionals use to gauge where the patient is in the end of Dementia.  The one that is most used, here at Generations Hospice Care, is called the The FAST Scale for Dementia, also known as the Reisberg Functional Assessment Staging Scale. 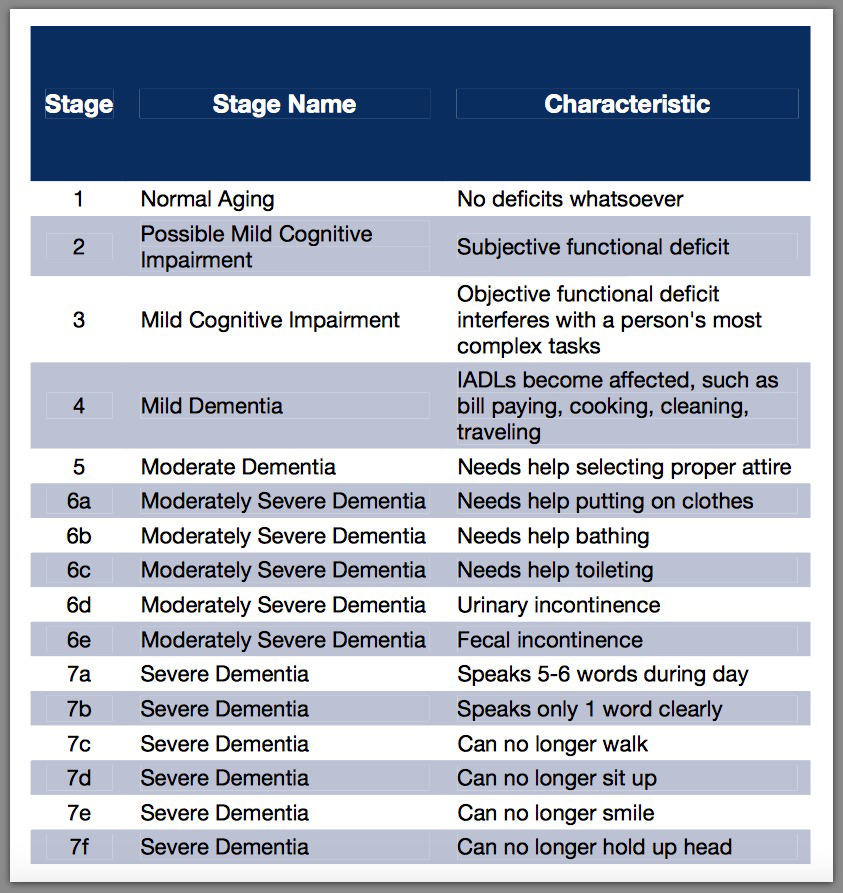 The Fast Scale looks at the functional capabilities of the patient currently.  While it is not fluid, and other diseases can play a factor in the underlying cause for some decline, it provides a good view of the debility.  Essentially every functioning adult without a disability that affects cognition starts out as a 1.  This is considered a fully functioning adult, but as the disease progresses, the Dementia patient declines to an infant-like state or a 7 and below.  This is a harsh reality.

End stage Dementia can be heart-wrenching in so many ways.  Dignity is lost due to the need for very private personal care. The ability to eat becomes compromised and the patient becomes more bed-bound and needs round-the-clock care. Unfortunately, due to Medicare guidelines and the sheer amount of time that a person can live with Dementias, Hospice is rarely involved until the very end unless the patient has other diseases.  For us, grandma was a textbook as they come.

That day, our family had to change grandma’s care.  Home health staff had called us, Grandma was not coming to the door, and her medicines were still in her weekly planner.  She complained that she hurt and didn’t want to get up.  She was thin, they reported she was no longer eating well.  She had increased urinary incontinence, her brief was soiled, and she was no longer changing herself.  The Home health nurse suggested that it was another bladder infection and that she needed to be seen by a doctor.

My hubby also learned about accepting the inevitable that day.  He and his dad went to collect Grandma and take her to get checked out at the emergency room.  She was weak and lethargic but still had enough fight to attempt beating them with a hairbrush.  My husband was one of her favorite people, but she had no idea who he was.  Eventually, he was able to carry her to the car and get her to the hospital.  She did have a severe kidney infection but during her stay, doctors deemed she was no longer able to stay by herself.  Her cognition was gone, and she was unable to meet the physical demands of maintaining her own activities of daily living.  She was placed in a nursing home and eventually Hospice in the last weeks of her life.

If you have questions regarding Dementia and how to meet the needs of your loved one, a list of organizations is provided below.  It is also recommended that your physician be notified as they can offer resources and a baseline to what is occurring, and if all else fails we are available at Generations Hospice Care to guide you to the right people.

For most of us, eating and drinking are the life signs we take advantage of, but we know we must eat to live.  Often, this is where a caregiver may ask for a feeding tube.  This is also where you may hear a term called terminal delirium.  In my next blog, we will discuss food, fluid, and terminal delirium.