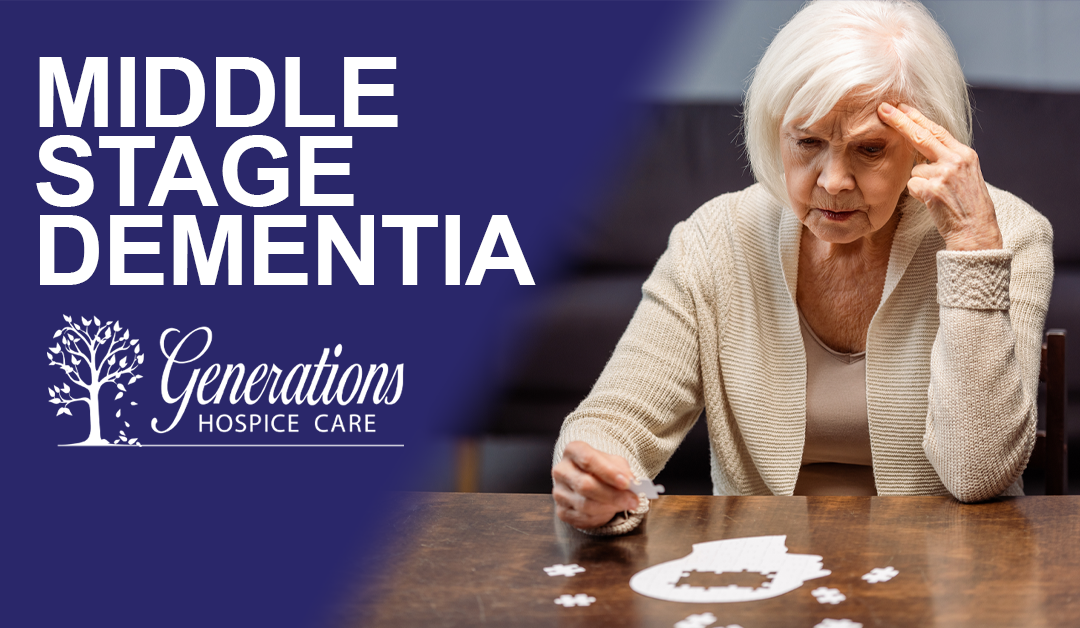 Dementia, whether it’s Alzheimer’s disease or another “forgetful” diagnosis, most of us understand that it is the permanent loss of memory.  Through the magic of television and the internet, we see characters in shows who lose the ability to recognize their loved ones, they forget where they parked, or they become lost due to the inability to remember their home address.  While these are all incidences that do occur with Dementia patients, it only presents half the story.  What is often not depicted is the physical changes, the inability to control the bowel and bladder, the loss of speech, the loss of appetite, and the loss of physical control of the body.

Dementia is usually progressive.  Progressive is a horrible word for this, as progress should be a good thing, but not with Dementia.  Most Dementias are related to organic changes to the brain.  Alzheimer’s, often referred to as the shrinking brain, is a disease in which the brain slowly dies and control of the bodily processes is lost.  The symptoms start with short-term memory loss and progress to total loss of bodily function.  There, it’s been said…total loss of bodily function.  Before we dive into the types of Dementia, I would like to share my own personal experiences regarding Alzheimer’s disease.

As a long-term care nurse and now Hospice, I despise Alzheimer’s disease. I hate it. I wish and pray every day that the incredibly brilliant minds in our country find a cure.  It leaves nothing behind except the body.  As horrifying as it is for the patient, it leaves no one unaffected.  We spend years, cultivating our love of family and friends, and we foster relationships that should comfort and shelter us as we age, Alzheimer’s disease strips everything away.  All that remains is a shell of a human who lies in wait until finally the breath lives their body.  It’s absolutely the worst to witness, and it is one of the hardest losses to go through. This is why I chose Hospice work, as we are able to help navigate the worst of it and provide some solace to the painful realities.

Below is a chart that shows the common types of Dementia and their causes created by “Senior Living Solutions”, a geriatric psychosocial program.  If you look at the bottom of the chart, the stages of Dementia are listed.  Most usually, we all have some familiarity with early-stage Dementia, the forgetfulness, losing, and misplacing things.  We all know someone like this, they seem ok.  During the conversation, you might notice a misplacement or a lost word.  The person’s appearance is good, their clothes are appropriate but there is a significant note of absent-mindedness.  Typically, this person may still be independent and even capable of driving.  Unfortunately, there is no predictor for how long a person can remain in the early stages of Dementia, but some factors can increase the progression such as other diseases, lifestyle, and even diet.  One of the important things to note, Dementia factors never improve.  There are no reoccurring peaks to their abilities.  The cognition changes will plateau and decline but never peak. 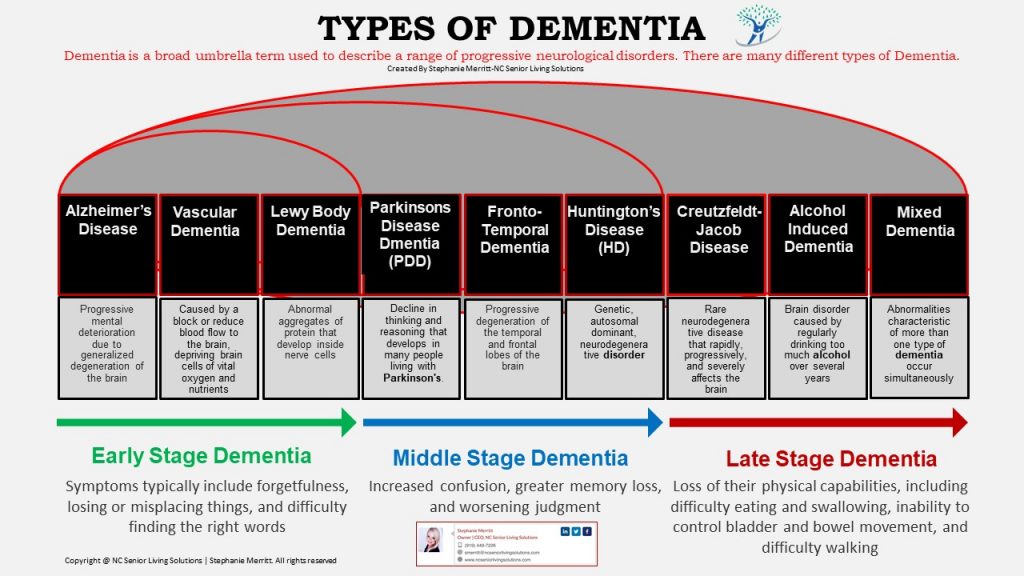 The very best we as medical professionals can do, is offer education and some medications that can slow the progression, but eventually, the medications will no longer help. The change should be gradual during the early changes, however if there is a sudden change to your loved one, it is likely an outside factor that could be fixed. Things such as an infection or a recent surgery with anesthesia can cause a sudden decline in cognitive abilities. Depending on the infection, antibiotics could be prescribed, and an improvement is possible. Anesthesia is slightly different, as it may just need time to leave the body. However, depending on the procedure, age, time in surgery and patient’s ability to heal can and will play a factor.

Middle Stage Dementia is an increase in all the symptoms, but also a significant change in judgment. Let me give you a little story about how we knew in our family that my husband’s grandma was worsening.

Grandma lived independently in her home, and with the help of her family, she had done quite well for a long time. She had a cat named Barney, who was a runt from our barn cat. She and Barney lived well together. In the early stages of her Dementia, grandma was good at keeping the Dementia under cover, she’d place little notes on her door of the neighbor’s names, and she would hide the confusion by saying that she didn’t go out because she was “down in the back.”
On one particular visit, my hubby and I had stopped in to see grandma in the afternoon. She was wearing a nightgown and jewelry; she had put a lot of things from storage in her bathtub and Barney the cat had gained significant amounts of weight. As I walked through the house, I noted little bowls on the floor, some had half-eaten cat food (some of which were in very strange places). When I asked her, grandma stated, “Barney hasn’t been eating well so I put food in all the places he likes to hide.” I had just handed her an ensure shake, at which this sweet little woman, poured some of the high-calorie shake into the bottle’s lid and the cat just lapped it up. What we learned from that visit was that she was no longer bathing, no longer dressing appropriately, and no longer able to cover her confusion. We also realized that Barney needed a diet that did not include Ensure.

A home health nurse and a nurse’s aide were arranged, and cameras were placed in the entryways of her home. Grandma was able to remain in her home, independently for a few more months.
Middle Stage is most likely the hardest of all the stages for the patient and family. Physically, the person may be able to ambulate, may still be driving, and may be able to appear absolutely normal until something occurs that takes them out of their normalcy. For our grandma, it was a simple doctor’s appointment. During the appointment, she seemed ok. She seemed familiar. She did need some lab work and it was hard to find a vein and I could tell she was irritated. When we returned home, she was truly out of sorts, she was not recognizing any of us. She had fought us all on taking her medications, we compromised but my lord it was a brawl. She became different, she was verbally abusive, and she could not be reasoned and that was because we were suddenly strangers to her. Imagine if suddenly, there was a group of people around you, telling you what to do, touching you and you had no idea who they were. I would fight like a pole cat.

Middle Stage Dementia is also the most dangerous. Looks are deceiving. Often the patient still looks put together, they can behave as if nothing is wrong. This is often when folks with Dementia get lost in their home or start fires while trying to cook. When there is no other disease playing a factor, the patient’s physical capabilities can outweigh their mental capacity. When advising family and caregivers, this is where a home health program or a memory care unit in a nursing home is often the best advice.
If you are in the Harrison County, Iowa area, there are folks who can help you. Please feel free to check out the following organizations, it does not ever hurt to ask for help. This is also a good time to consult the physician, there are resources that require a doctor’s advice and order.

Come Back for our next blog covering End-Stage Dementia